DataHub Scripting solution calms the conflict of bats vs. blades

Required by law to protect a rare species of bat, a major wind power generation company finds a solution using the Cogent DataHub®.

A rapid expansion of wind farms across the Eastern and Central United States has been checked in the past couple of years due to growing concerns for wildlife. An endangered bat species lives in that area, and is protected by law. Fears that the whirring blades of wind turbines could be harmful to this species of bat were sufficient to halt construction of a wind farm in West Virginia in 2009, and the discovery of a dead bat near a wind turbine in Pennsylvania in 2011 caused the power company to shut down the whole 35-turbine system for several weeks. 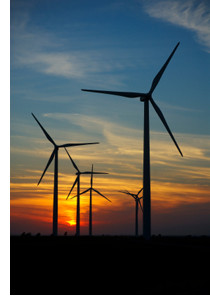 Although wind turbines are known to cause a few fatalities among common tree-dwelling bats, the endangered bat was thought to be largely safe, as it lives in caves, hibernates for more than half the year, and is seldom found in the vicinity of wind turbines. However, in the fall these bats migrate from their feeding grounds to their home caves for the winter. During this time, the chances of them passing through a wind farm are greatly increased.

In March a few years ago a major power company in the USA was informed by the US Fish & Wildlife Service that a number of turbines on the bat migration routes would need to be shut down while the bats are migrating. This caused quite a stir. The migration period for the bats is two months long―from mid-August to mid-October. Shutting down the whole system for that length of time would be very costly, not to mention the loss of clean energy which would need to be replaced by fossil fuels.

To maximize uptime, the company gained permission to let the turbines run during the times that the bats were not flying – all daylight hours, and in the night time when air temperatures drop below a specific temperature setpoint, or when the wind is fairly strong. The challenge was to implement a complete solution. A single bat fatality could mean full shut-down, legal penalties, and even lawsuits.

Top management at the company immediately took action, contacting the wind turbine manufacturer, who also provides the control systems. After several months of emails and meetings, it became apparent that the manufacturer would not have anything ready in time for the mid-August deadline.

“With three weeks to go, they told us there was no solution in sight,” said the SCADA engineer responsible for the project, “and we would need to go to manual operation, and reconfigure the cut-in speed on every turbine, twice a day.”

Most wind turbines are designed to “cut in”, or start turning to produce energy, when the wind is blowing at a certain speed. For these turbines, the normal cut-in speed is 3.5 meters per second. As the bats are active in low to moderate wind speeds, the company would need to raise that to 7 meters per second each night, and then drop it back down to 3.5 the following morning. This would mean manually reconfiguring the PLCs for 100 turbines, twice a day.

“I thought there must be a better way,” the project manager continued. “We’d been using the DataHub for years, and knew the potential was there to leverage this asset further. I gave Skkynet a call, and told them what we were up against. They delivered by helping us to develop a very efficient program using the native scripting language of the DataHub. The code ran right on the SCADA interface of the OEM system – so it’s as reliable as you can get.”

“Working together with Skkynet, we came up with a DataHub script that doesn’t change the cut-in speed of the turbines at all. We just blocked them from starting. The script tells each turbine to stay off, and keeps measuring wind speed. When it picks up to 7 meters per second, the script releases the turbine to start, and it ramps right up to the operating state. At the end of the day, we have a complete audit trail of every turbine controlled, including a history of critical parameters, such as rotational and wind speeds, and energy curtailed.”

“The script also has a temperature component. On cool nights in September and October, when the temperature drops below the dew point, it uses the same algorithm for starting and stopping the wind turbines.”

By the first week of August a test script was written, and after a few days of testing and last-minute tweaks, it was ready. The system went live on August 15th, and is meeting all expectations. Every night, whenever the air temperature is above the setpoint and the wind speed falls below 7 meters per second, the wind turbines stop, allowing the endangered bats to return safely to their caves for a long winter hibernation.

“I call the DataHub the Canadian Swiss Army Knife,” said the project manager. “We are able to accomplish a host of required functions with a single product solution. The ability to provide sophisticated logic and control algorithms with the built-in functionality of this product is the game changer. Being able to securely deliver real-time data between a site and the control center system allows the dispatch team to monitor the control process and maximize the production of clean, renewable, energy sources. Talk about a smart grid – who would have thought we’d be doing this type of thing in real time?”